Home Uncategorized Creating the future we want to see 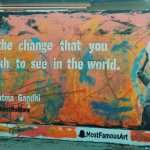 Creating the future we want to see

What’s your favourite place? What is it about that place that you enjoy? How does it make you feel?

Imagine if the places where we lived and worked were walkable, affordable and regenerative. They made it easy for us to gather, shop, have fun, eat together, and be around people different from us. With this mindset, we could fundamentally change our communities, and collectively have an impact on the health of our planet.

The challenges of our time — climate change and resilience, physical and mental health, equity and inclusion — are global in scale. But the most effective and catalytic solutions can often be found on the local level – our public spaces, streets and neighbourhoods.

Public places are most dynamic — and most enduring — when they showcase and boost a community’s unique public life, economy, and culture. This is especially true when the people using them are involved in their creation, continual re-creation, management, and governance. This is the essence of ‘placemaking’.

[…] both an overarching idea and a hands-on approach for improving a neighborhood, city, or region, placemaking inspires people to collectively reimagine and reinvent public spaces as the heart of every community. Strengthening the connection between people and the places they share, placemaking refers to a collaborative process by which we can shape our public realm in order to maximize shared value.

More than just promoting better urban design, placemaking facilitates creative patterns of use, paying particular attention to the physical, cultural, and social identities that define a place and support its ongoing evolution.

With community-based participation at its center, an effective placemaking process capitalizes on a local community’s assets, inspiration, and potential.

Why is Placemaking needed?

For many decades, the city-building professions have generally overlooked the role of public space as the fulcrum of great cities.

Instead, they’ve trained their focus narrowly on buildings, businesses, roadways, infrastructure, and regulatory frameworks. From traffic engineers to economic development specialists, these professions have retreated into ‘silos’ that separate them from each other and can blind them to the overall needs of cities and their citizens.

Each profession pursues narrow, disconnected goals that add up to far less than the sum of their parts. They also ignore the complexity of places, which are intricate and interconnected systems just like diverse rainforests.

As public spaces and a sense of place have fallen between the cracks of disciplines, placemaking and place governance have emerged to offer an innovative and more successful way to achieve collective impact in community building.

Placemaking is an inclusive and collaborative process, a mindset, an attitude that brings people, disciplines and organisations together to create positive changes to an area (small, medium or large).

It aims to create places that people want to be in and where humans thrive. It is a process that can strengthen the fabric of a neighbourhood or community.

Placemaking empowers people to act, not only as an ethical principle, but also because it is a real way to improve the way a person relates to themselves, their neighbours and their world.

Great public spaces happen through community-driven placemaking and place-led governance. These great places are the foundation of great communities, which in turn are the building blocks of a prosperous, equitable, and resilient society.

With community-based participation at its center, an effective placemaking process capitalizes on a local community’s assets, inspiration, and potential, and it results in the creation of quality public spaces that contribute to people’s health, happiness, and well being.

It is time to reinvent the shaping of cities from the place up. The rapidly growing and global placemaking movement is demonstrating how to turn the shaping of cities upside-down to start with places, and in the process, invent crucial new scalable place-led models for governing, financing, and designing our cities.

As leadership towards this goal emerges, PlacemakingX works together to highlight, connect, and support these people, their ideas, and their projects.

Change is possible when we are clear on the real priorities, work collaboratively and act local (and think global).

We can create the future we want to see for ourselves, our children and future generations, not to mention the planet and the rest of its inhabitants. The key is to focus on what really matters – people and places.

Placemaking.Education is a collaboration between PlacemakingX and Town Team Movement to help people learn more about placemaking. It collects ﻿and curates the most important placemaking concepts, lessons learned and street-level secrets into one place to make it easier and faster for you to learn.